I spent a long time on the choosing of a subject for this assignment, I wanted something both visually interesting, and practically challenging as I wanted to stretch myself more than with the previous assignments.

I'm pleased with the subject I chose, as it pushed me creatively, largely because I was aware that it would be easy for it to look as though I was relying on the quality of subject to carry the images.
I think I've been able to produce images which illustrate the qualities asked for effectively.
I've allowed myself a little more creativity in my post-production than I might in other assignments, as I felt it was more appropriate in this assignment.

I have tried to use a few different types of light source, including flash, tungsten, LED and both indoor and outdoor natural light.

Rather than divide the photos rigidly by the four characteristics asked for in the brief (form, texture, shape and colour) I've interpreted it a little more loosely and will attempt to explain which of these apply to each image in turn. I've also added one more image than the brief calls for, but I think they're all worthy of  inclusion. I took many more that didn't make the cut! 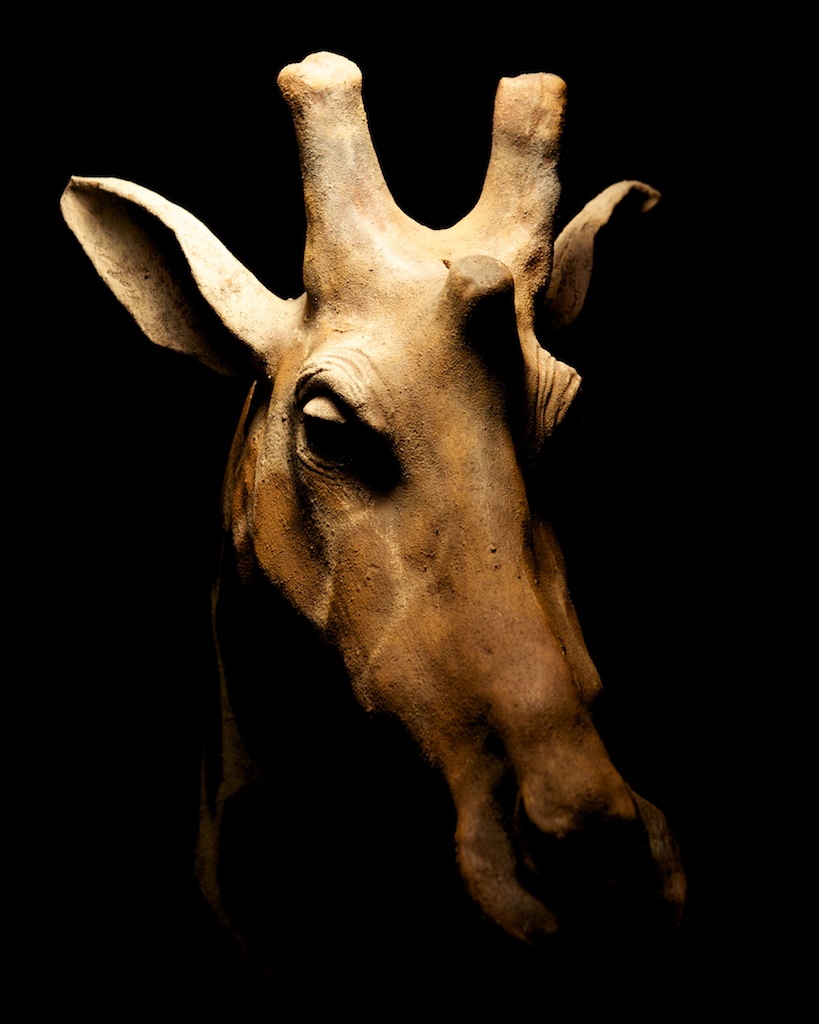 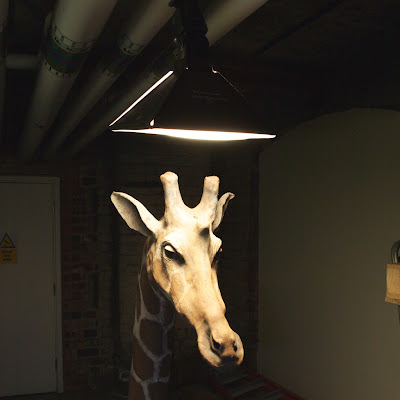 The word Chiaroscuro is, pleasingly, a 'copulative compound' of the Italian words for light and dark. It refers to both the use of high contrast in images, and the use of light to accentuate the three-dimensionality or form of the subject of a painting or photograph.
Despite being a relatively large light source, the texture of the subject is revealed by the single direction of the light.
I went with a tight crop for this image as I think it adds to its intimidating style. 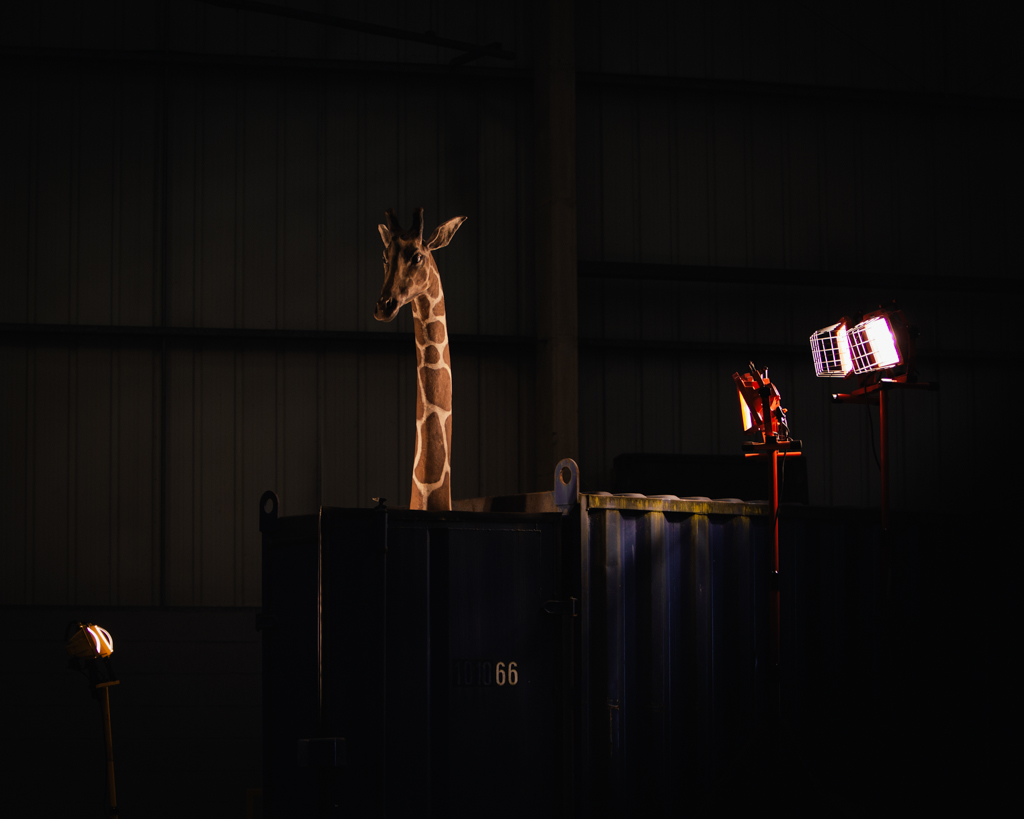 
I deliberately allowed the near camera right light to spill onto the container to show the yellow lichen which I think looks good against the blue.


I tried removing the numbers from the container door in post, but I think they do more good than harm. 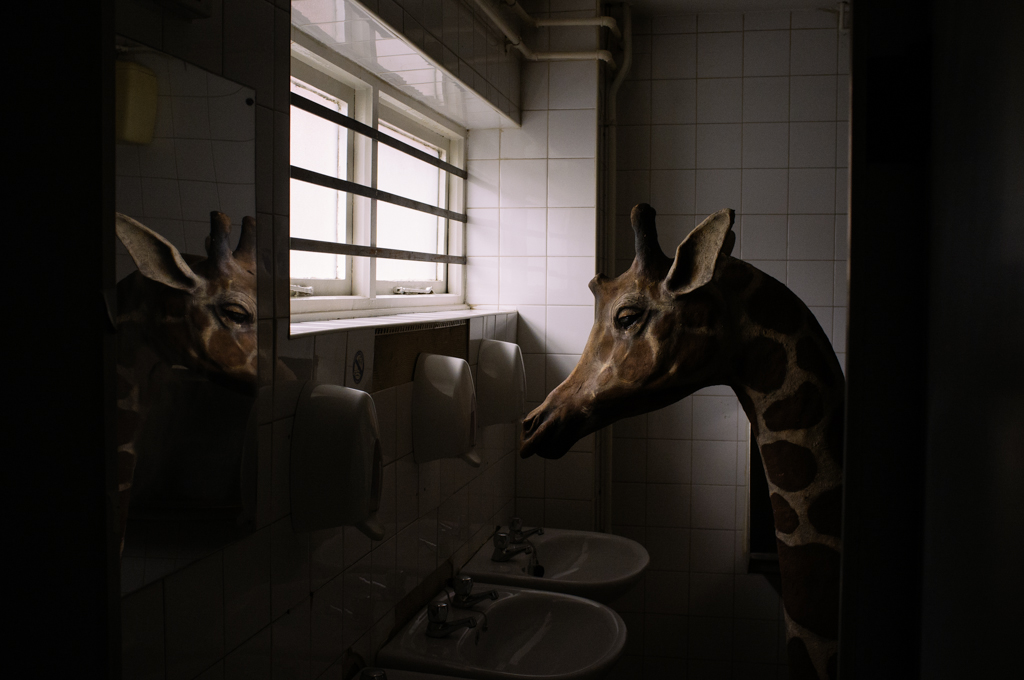 
I was inspired by Nigel Shafran's Compost Pictures [2008-2009] to seek a location with smooth tiles (to juxtapose with the rough texture of the subject) and natural light. I say inspired, when the truth is I felt like I'd been hit by a bus looking at it. I need to explore why I feel his simple photos of the most mundane subject imaginable seem so much better than anything I've ever done creatively. I wouldn't mind so much but I'm not able to even understand what it is about them I find so striking.
Although the light is coming from the window, it is actually quite similar the the small softbox used in the Chiaroscuro image, as although the window is larger it's also further from the subject which means it's relative size is not that different. Obviously the angle is very different, but the quality of light is almost identical, giving form to the subject and  revealing it's texture. 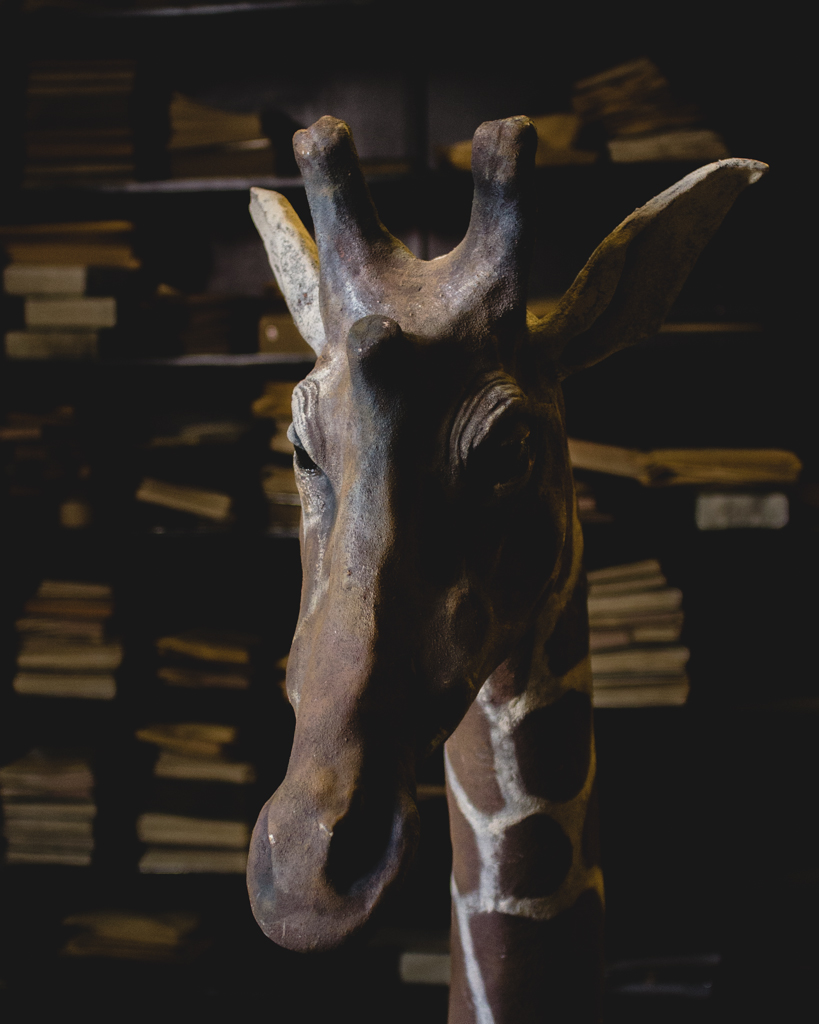 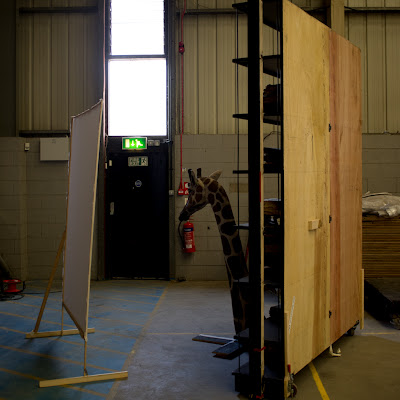 It struck me early on in my efforts to come up with ideas that I could make an attempt at recreating the Dutch painter Rembrandt's distinctive portraiture look, although the typical 'Rembrandt triangle' of light on the dark side of the subject's face is obviously a little difficult to achieve with a giraffe.
This style is very good at showing the subjects form.
It took me a while to find a backdrop I was happy with, I wanted a more scholarly library look, but I think these higgledy-piggledy piles work ok. The back drop needed some fairly heavy burning in post as it was too busy and competitive with the subject, with hindsight a large flag between the window and bookshelves would have solved this problem.
I faded the blacks using a J shaped tone curve on the RGB channel in Lightroom as I thought this would suit the technique. 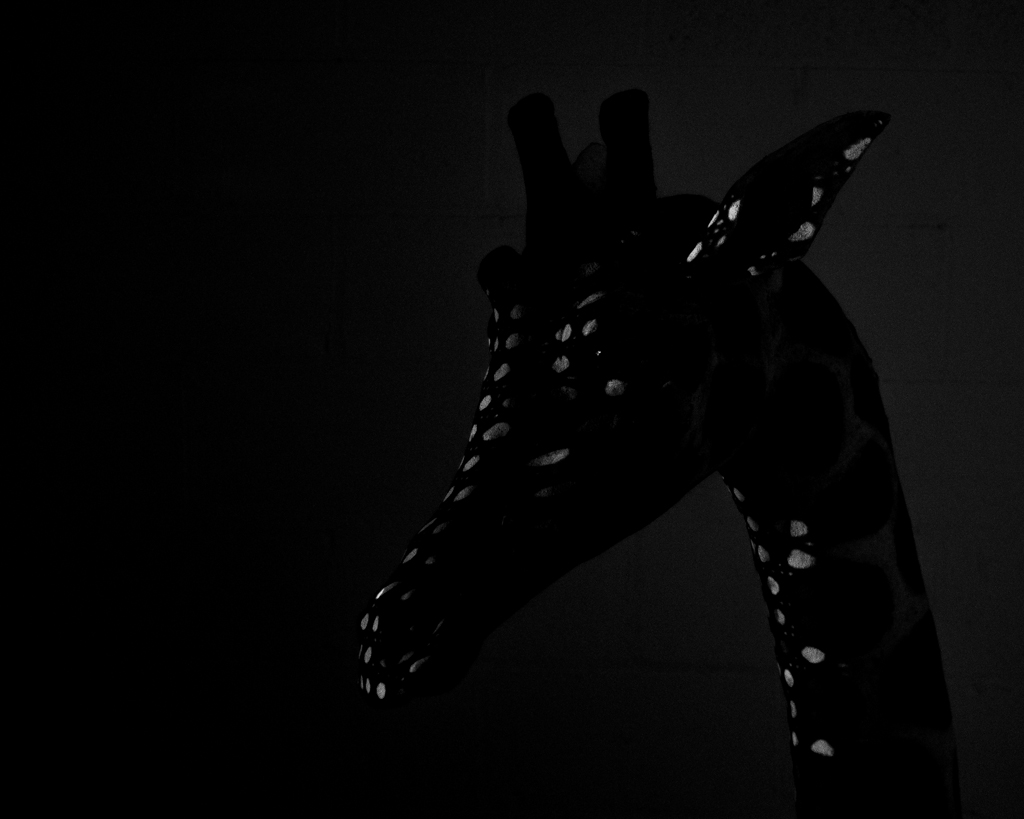 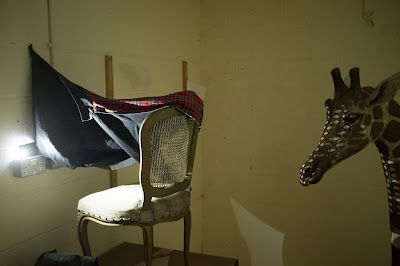 In the feedback from my previous assignment my tutor suggested I familiarise myself with the work of the French photographer Fernand Fonssagrives, much of whom's images involve placing patterned objects between hard, small light sources and his subjects. The use of these 'gobos' creates high contrast images in which the contours of the subject are highlighted though the distortion of the regular patterns of light, revealing the subject's form.
I knew the smaller the lightsource I used, the harder the shadows would be so I decided to use the LED light on my mobile phone. This meant the room had to be completely dark, and a very slow shutter speed was necessary.
I used my jacket to flag the light, to stop it spilling onto the wall behind the subject.
I experimented with the positioning of the light relative to the subject and eventually decided on this 'narrow' angle whereby the light is pointed at the side of the subjects face furthest from the camera. 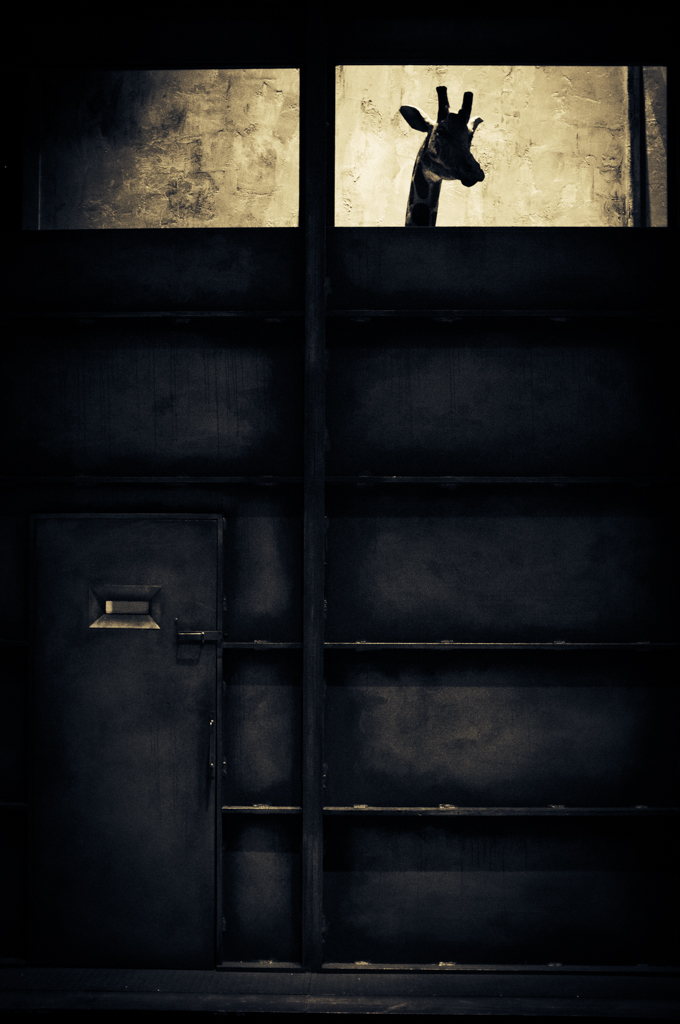 While thinking about how to show the shape of the subject, I thought the best way was to try to create a silhouette. Although this is not a true silhouette, as the lights above, and the bounce from the platform beneath do give some form, the contrast between the bright background and the dark subject gives clear definition to it's shape. 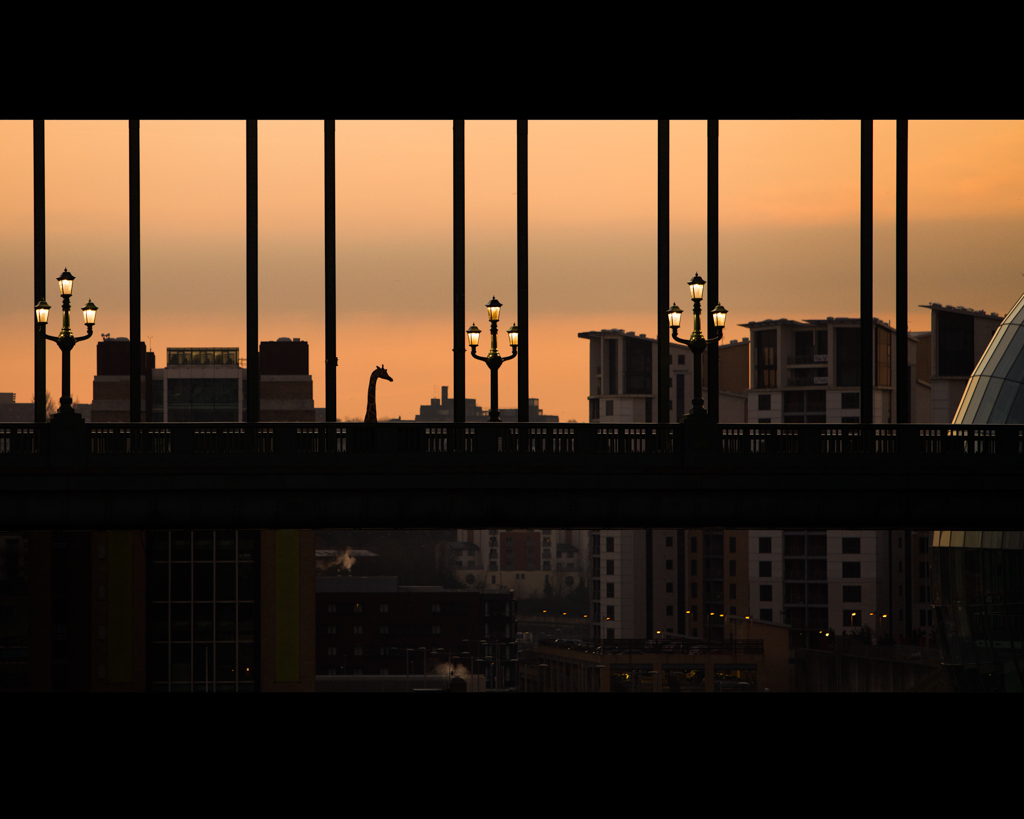 Giraffe on the Tyne 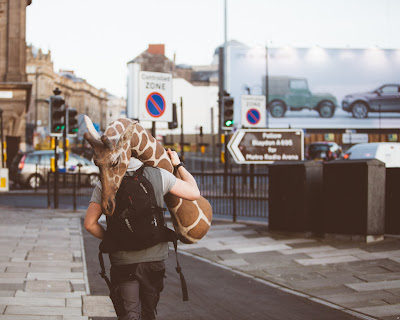 Honestly, pretty much my first thought after deciding on my subject was "Hey, I could put him on the Tyne bridge at sunrise". I'm not sure what this says about the workings of my mind, but it amused my colleagues that we had to take a giraffe on tour with us so I'd have him when we reached Newcastle. I enlisted the help of a very good -some would say daft- friend and booked a taxi to take us into town before sunrise. It was bloody freezing! So I positioned my mate and the giraffe on the Tyne bridge (much to the bewilderment of the morning commuters) and sprinted over to another bridge further upriver to get this shot. I had to phone my assistant and have him hold the giraffe above his head to get this, so I had to remove his arms in post.
We mistimed the shoot a bit, getting there too early, but neither of us were dressed for the weather so we went with this. Ideally we'd have waited for the sun to rise into frame but I think it's still a decent attempt.
I wanted the image to have a widescreen look, like a still from a film, but the while the 16x9 crop worked for the image it jarred a bit when viewed as part of the set, so I added the black bars at the top and bottom. I think it works, looking like a widescreen film viewed on a standard tv but I'm interested to hear my tutors thoughts on it. 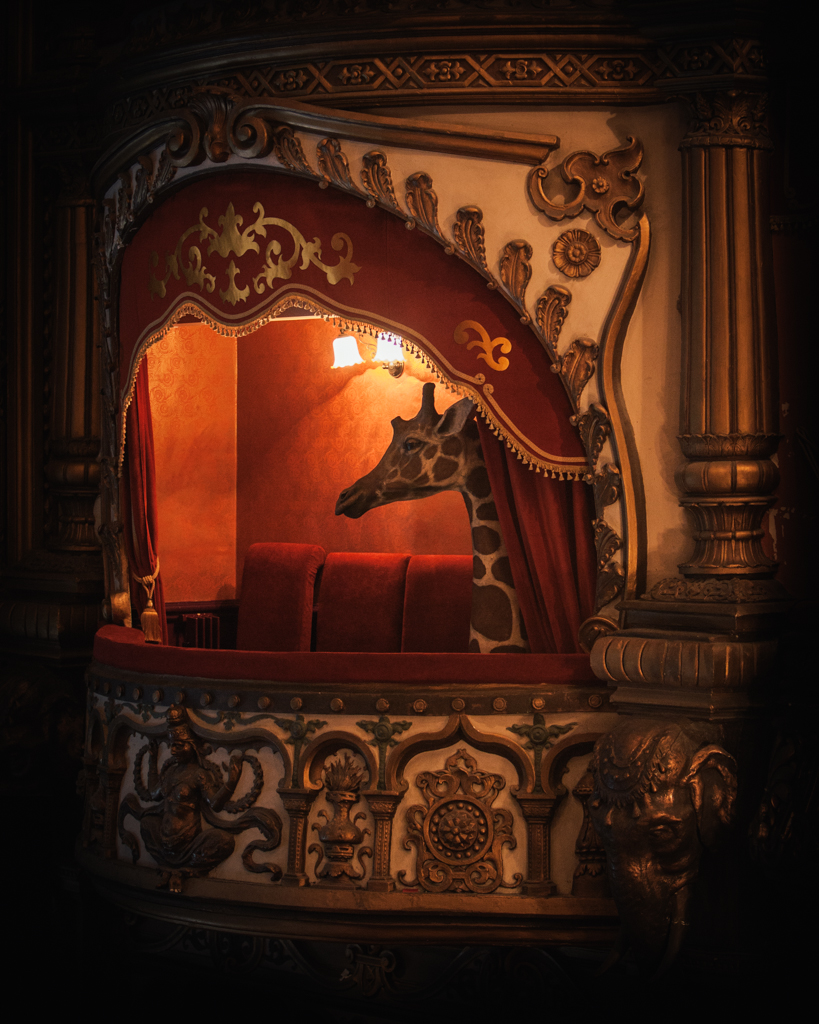 I wasn't sure whether to include this, as although I think it's a good image, it's more to do with the way the colours of the Grand Opera House in Belfast complement the giraffe, and the fact that the decor includes an Elephant than the lighting that makes it work. But it suppose it works for colour, and the fact that the wall behind the subject is much brighter than him shows his shape well. 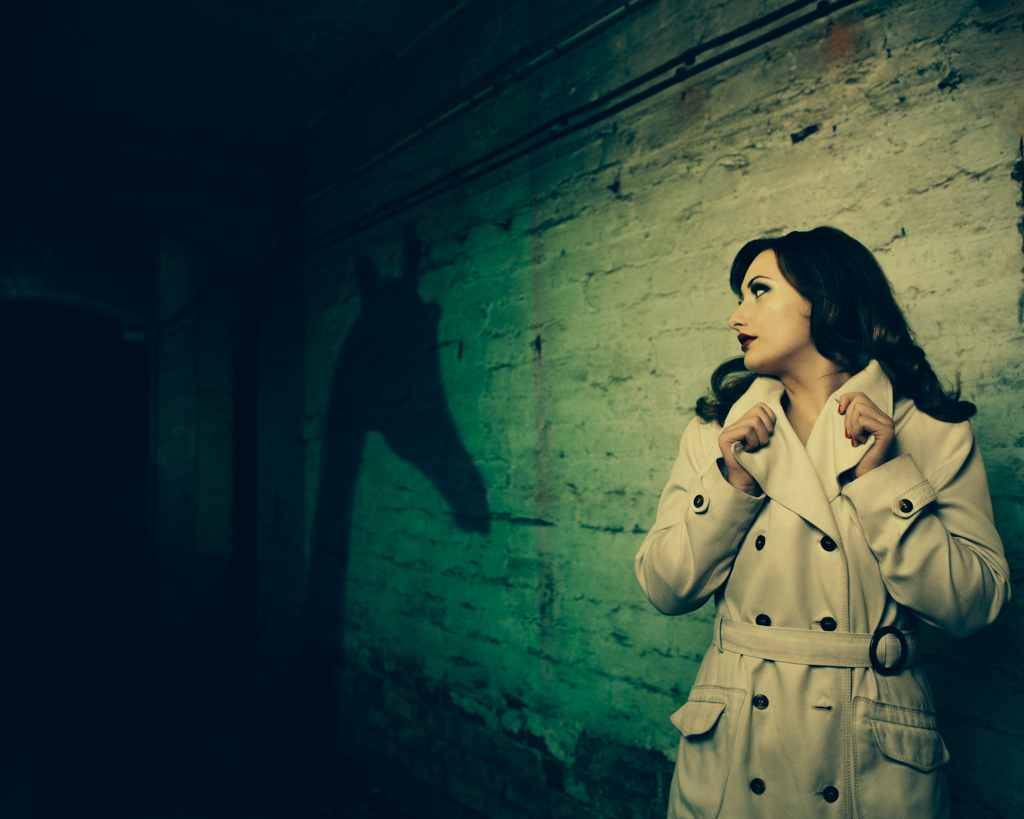 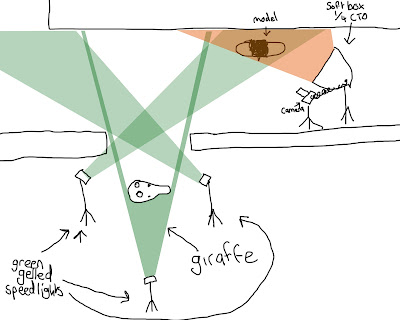 For this image I was inspired by a similar shot in Joe McNally's 2009 book The Hot Shoe Diaries. In the book, the shadow is cast by a man with an axe, with a single green speedlight. I began with a single green light, but the doorway created an ugly square block of light, so added two more crossing over to soften the edges. Although it is still possible to see the edges of the first light I preferred the dark gaps to the alternative which was to overlap the lights which caused over-bright strips each side of the shadow.
I am pleased at how I dealt with the challenges of the location.

The image is obviously heavily processed, with large adjustments made in all four of the tone curve channels. The processing is based on a simulation of PX-70 instant film, by VSCO.
I was disappointed that I was unable to get the shadow of the giraffe suitably dark in-camera as there was too much light bouncing around with the (white!) walls being so close together, so it was necessary to burn this area in post.

The last part of the brief for this assignment asks for the student to reflect on their work in relation to the assessment criteria laid out in the introduction to the course. There are four categories, which are as follows:

Demonstration of Technical and Visual Skills:
I think overall the images I've submitted show a reasonable level of technical skill for this stage in the course. The only shot that I would change is Chiaroscuro, which would have benefited from a smaller aperture to keep the full subject in focus. This is something I need to remember for future assignments as it's been flagged up by my tutor before.

Quality of Outcome:
I'm pleased with the quality of the final images, though I need to be better at the written side of things, and to try to be disciplined enough to write about the planning stage of the images. I need to improve my time management and self-motivational skills if I am to bring the quality of my communication of thoughts up to the level of my images.

Demonstration of Creativity:
I'm not sure about this one, it's difficult to judge myself as I always think I could do better creatively. I tend to go off ideas once I've done them, there were lots of failures along the way and I should have documented those too.

I suppose I should address the fact that I was given a deadline of two months to aim for by my tutor, and missed it by over 3 months. Although some of this is attributable to the amount of other demands on my time, it is certainly more an indictment of my time management than anything else. I will endeavour to improve in this area for the next assignment.
Posted by Unknown at 07:04